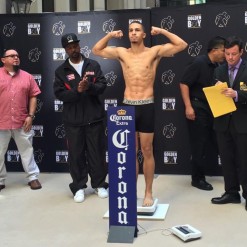 Brooklyn prospect Zachary Ochoa 12-0 5KO’s makes his Los Angeles debut as the co-main event of LA Fight Club tomorrow at the Belasco Theater in downtown Los Angeles. A heralded amateur, Ochoa brings an east coast name to the growing stable of prospects being developed by the match-makers at Golden Boy Promotions.

Ochoa took some time yesterday as he wound down his preparations to speak with Instant Boxing and talked about his career and potential future.

Albert Baker: Zack so “Zungry” that’s a little unusual, sounds like a mash-up of Zack and hungry- tell us a little about that.

Zachary Ochoa: You’re absolutely right, I got it when I was 15- everyone always said I fight like a hungry fighter so I put the two together. I like it it’s a unique name.

Albert Baker: We saw you after the Canelo vs. Kirkland fight, Oscar De La Hoya and Bernard Hopkins brought you up to the podium to introduce you to the media at the post-fight press conference. Normally that isn’t the platform to introduce your prospects- an indication that they’re excited about your future.

Zachary Ochoa: It was really humbling being on that stage with those two legends. I’m so blessed and happy to be where I’m at right now with a promoter like GoldenBoy and it was a glimpse of the future they have for me.

Albert Baker: Zack you were a standout amateur winning multiple tournaments and titles, how has the transition to the professional ranks been for you? What are the big differences?

Zachary Ochoa: When I was in the amateurs I fought with a more pro-style. I sat more on my punches- I never went in there and just threw a bunch of flurries for the sake of throwing more punches. I’m still learning every day, my trainer Kelly Richardson is always teaching me something new or showing me something different- I’m just getting more and more comfortable with every fight.

Albert Baker: You’re from Brooklyn that comes with a lot of expectations and history, is it something that makes you push harder?

Albert Baker: GoldenBoy isn’t scared to match their best prospects tough early in their careers, but they also have a track record of building champions- many of their former prospects have gone on to become champions or appear on TV for the PBC. Do you feel like your progressing at the right pace?

Zachary Ochoa: Hands down GoldenBoy is the best promotional company, I surround myself with the best people and right now I think they are the perfect fit. They did start a lot of the careers of fighters that are no longer with them and if it wasn’t for their work a lot of them might not be where they’re at. To become a world champion we’ll increase the difficulty of opponent and they’ll know when I’m ready.

Albert Baker: You have good hand speed and you’ve shown some good footwork, what do you consider your strengths and weaknesses?

Zachary Ochoa: Hard work, I put in hard work. I take care of my body, I don’t drink, don’t smoke, I eat healthy, and I just work hard- I’m hungry. As far as weaknesses I’m just new, that’s it. I don’t have any big ones but, it’s just being new and not being as experienced but I have skill.

Albert Baker: You got any hobbies? What’s your home life like?

Zachary Ochoa: I like to cook, I make a mean steak.

Albert Baker: Zachary on behalf of Instant Boxing we wish you good luck and good health in the ring this Friday.

Zachary Ochoa: Thank you, thank you for your time.

WE ARE IN THE BUSINESS OF MAKING CHAMPIONS GYMUBOXING! WE ARE ON THE FRONT LINES SAVING LIVES! THE CREATOR OF ALL THINGS IS GREAT!! Spread love! IMPOSSIBLE IS NOTHING!
View all posts by GYMUBOXING →
This entry was posted in News. Bookmark the permalink.